This LibGuide was used for the Curriculum Materials Center's Hunger Games in the Classroom event on Friday, October 25, 2013.

Hunger Games in the Classroom 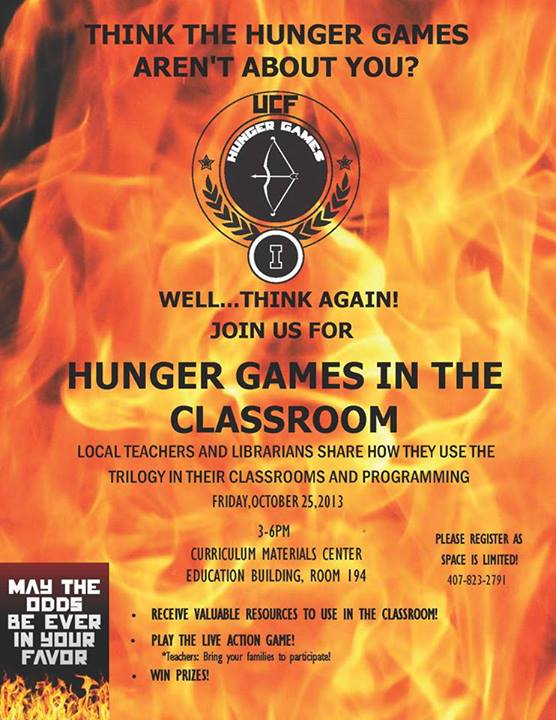 From Arms & Armor, "One of humanity's oldest weapons, a sword consists of a hilt and a blade. The hilt has a pommel for balancing the weapon, a grip for holding it, and a guard (quillons) for protecting the hand. The blade can be straight or curved. According to whether a sword is designed for cutting, thrusting, or both, the blade is either single or double edged, and has a rounded or pointed tip. For centuries, swords were used mainly for cutting and were held with one hand. But by the 1400s, larger swords came into use that were wielded with two hands, such as the Scottish claymore."

For the event, swords have the highest probability of winning. Swords defeat knives, spears, adaladals, syringes, and syringes with water. A sword versus a sword or a shield yields a tie. However, the outcome of a sword versus a bow and arrow or a adaladal and spear depends on distance. If you have a sword card, you have a good chance of winning but if you can make it to the fight zone first, no one can stop you! 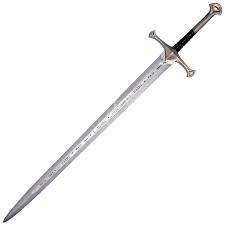 From Arms & Armor, "During the middle ages, the use of the bow in both hunting and battle was revolutionized by the introduction of the longbow and the crossbow. The longbow, a much-improved version of previous bows, could kill an unarmored man at a range of 660 ft and its steel-tipped arrows could injure soldiers wearing mail up to 300 ft away. Crossbows worked by simple machinery. They had a greater range. Some crossbows were so powerful they had to be loaded mechanically, using a crank called a windlass to draw back the string. But crossbows took longer to load than longbows and were more costly to make. Neither weapon had a clear advantage over the other, so many medieval armies used both longbowmen and crossbowmen."

At the event, we have an archery station, where a longbow will be demonstrated. Participants will also have the chance to try some student bows as well. Besides that, we have a NERF bow and arrow set as well as a NERF crossbow just for fun. After the event, they will be placed into the CMC's collection and will be able to be checked out by students! 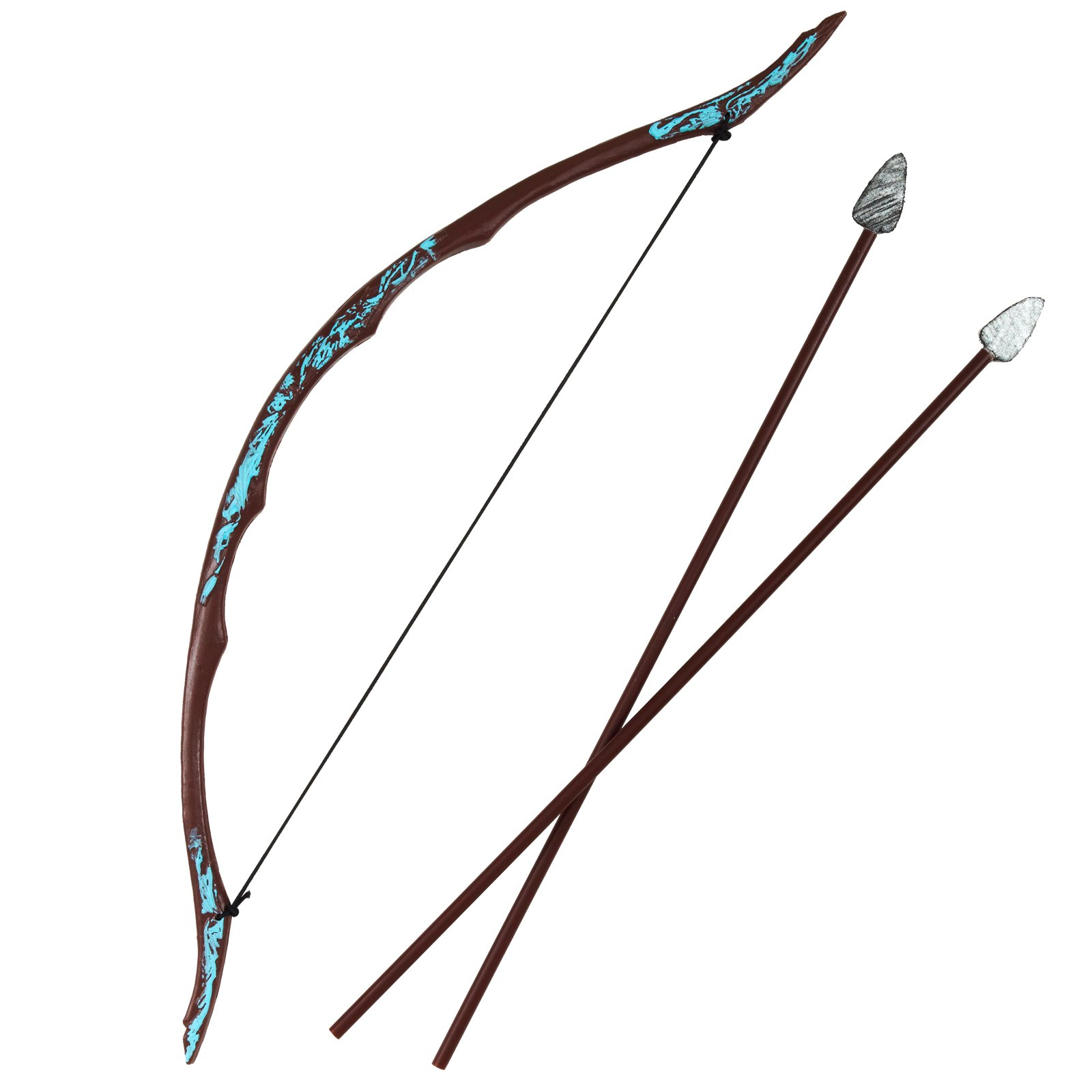 From Arms & Armor, "Axes, daggers, and knives have been used as weapons since prehistoric times. At first, axheads were made of stone or bronze, but by the Middle Ages they were usually mades of steel or iron, and often had additional spikes or projections to make them appear even more formidable. Most daggers have two sharp egdes running into a point and are typically used for stabbing or cutting. Knives usually have a single-edged blade. By looking at a selection of axes, daggers, and knives from all over the world, it is possible to see how different countries produce blades and shafts to suit their own requirements and cultures."

For the event, knives have a probability of 50% to win or lose. In this aspect, knives and spears are relatively the same although a knife would defeat a spear. Knives also defeat an adaladal, and a syringe. A knife versus a knife or a shield yields a tie. However, the outcome of a knife versus a bow and arrow depends on distance. A knife would lose to a sword, an adaladal and a spear, and syringe with water. May the odds be in your favor. 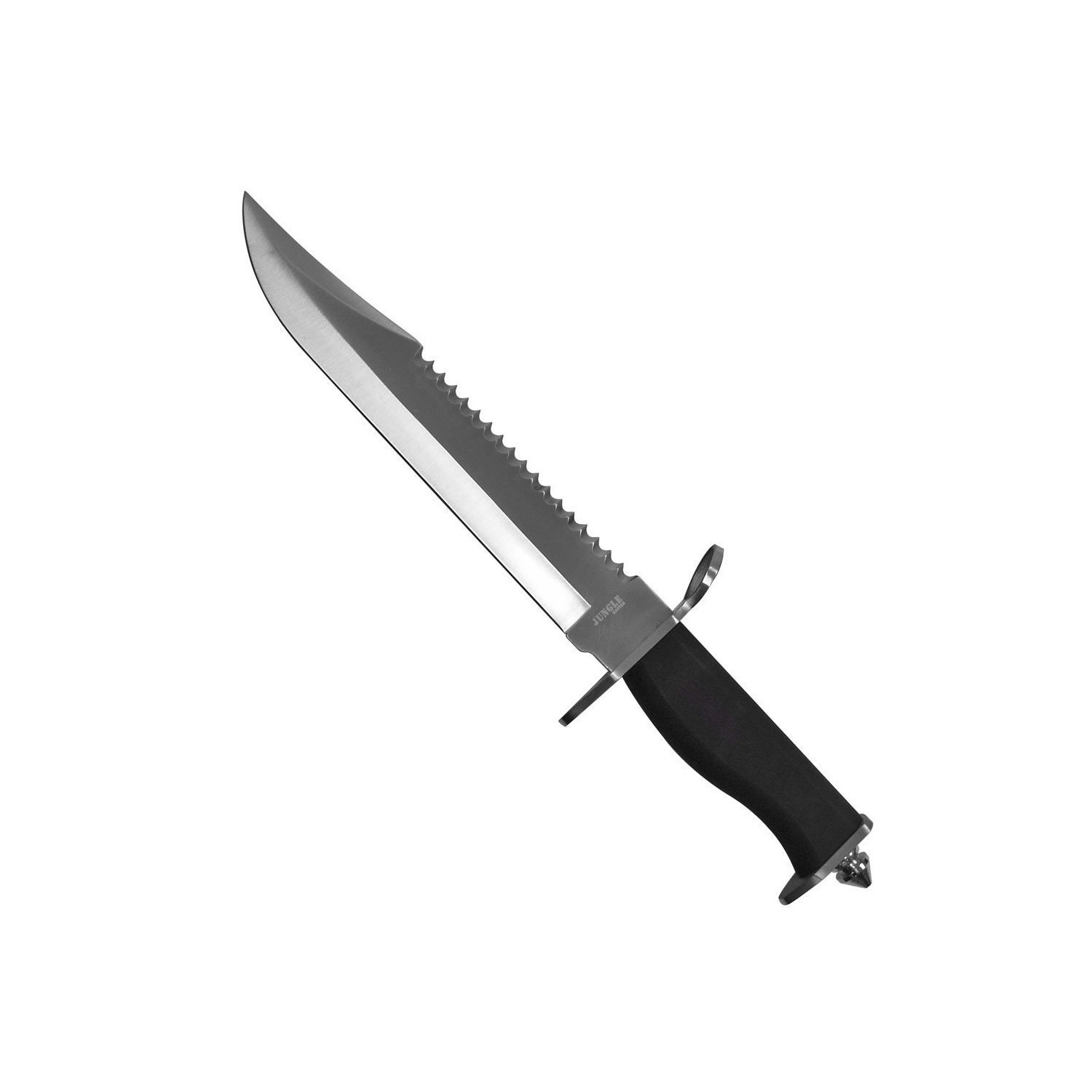 From Arms & Armor, crossbowmen used pavises (shields) in the 15th century. A shield was known as a buckler in Europe in the 17th century. "By the 18th century, Indian and Persian soldiers used a round shield (dhal or sipar) maade of steel or hide. Four bosses covered the attachment of the handles for carrying the shield on the left arm."

For the event, shields protect against other weapons, resulting in ties. The only weapon the shield wins against is the adaladal. 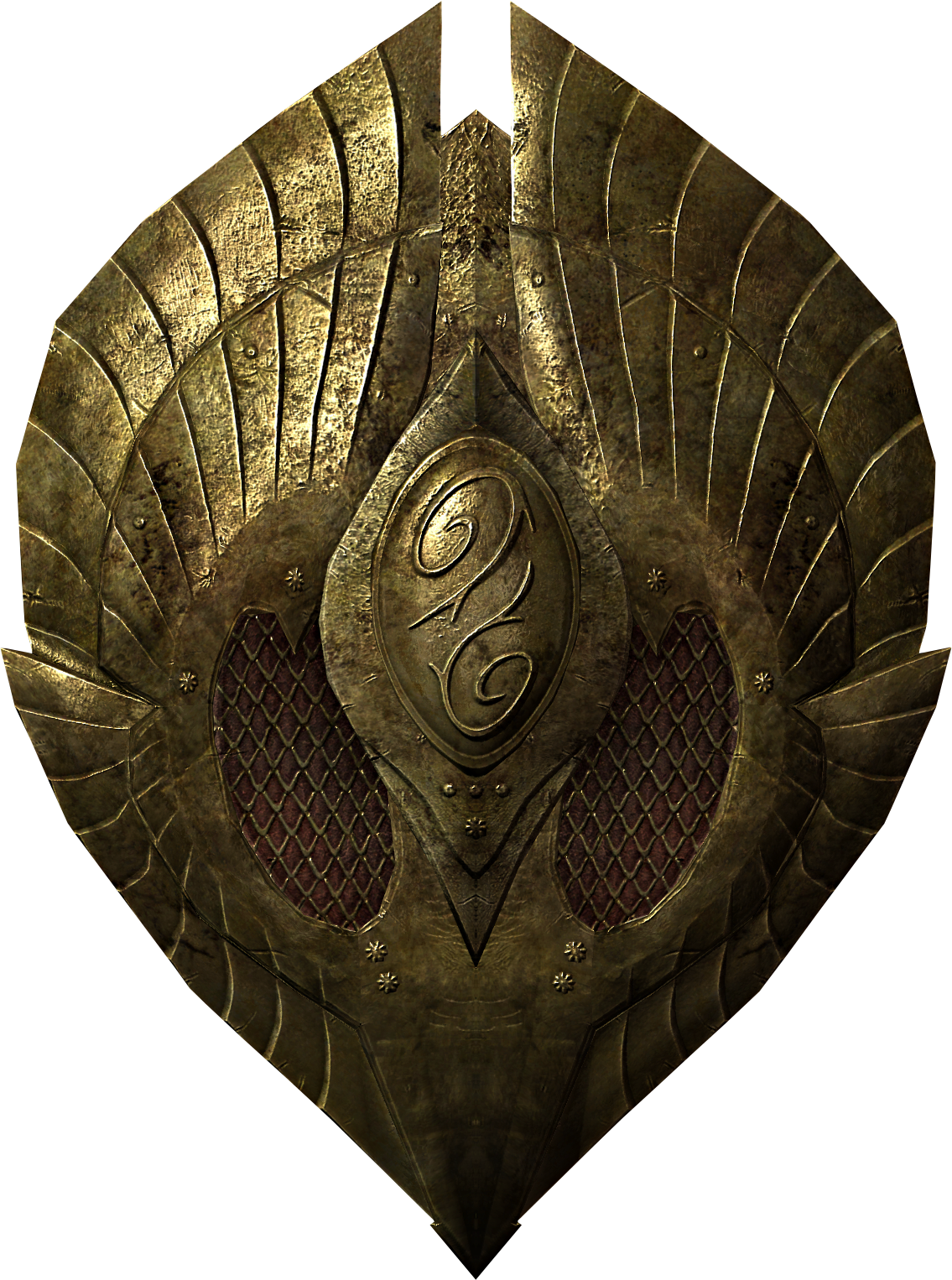 From Arms & Armor, "In order to hunt, attack others, or defend themselves, people have always used weapons. In the Early Paleolithic or Old Stone Age, the tiny, scattered communities used weapons mainly for hunting. Early people discovered that if they chipped hard stones such as flint into a pointed shape, the stones could be used for killing and skinning animals. Thousands of years late, in the Upper Paleolithic or Later Stone Age, weapons were revolutionized by the invention of the haft, or handle. Lashing a handle onto an axhead or spearhead made hunting and attacking weapons both stronger and reliable." In the time of the Greeks and Romans, spears were designed to pierce a shield and then continue on into the soldier. 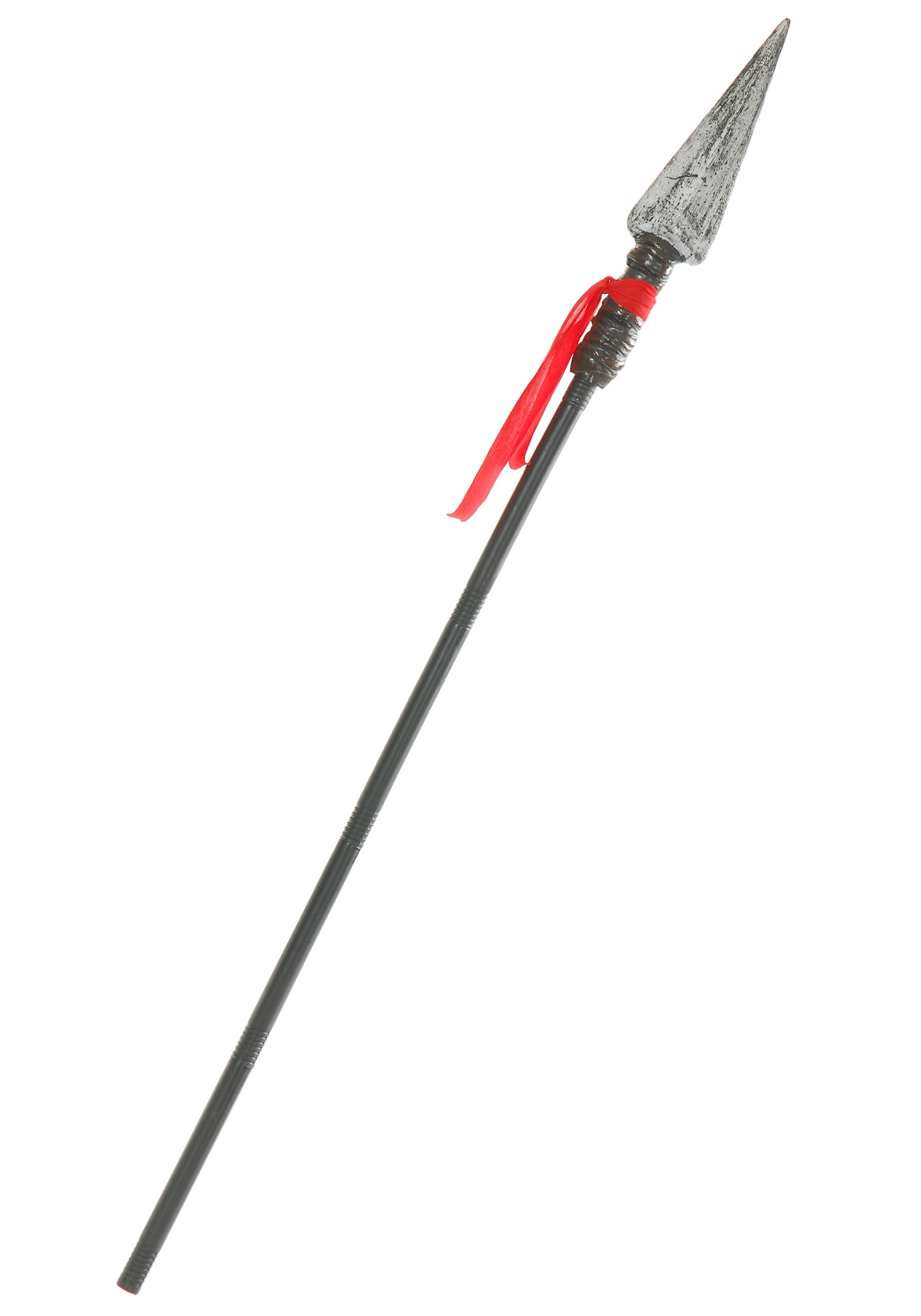 An adaladal, or spear-thrower or atlatl, is a tool that uses leverage to achieve greater velocity in dart-throwing, and includes a bearing surface which allows the user to temporarily store energy during the throw. It may consist of a shaft with a cup or a spur at the end that supports and propels the butt of the dart. The spear-thrower is held in one hand, gripped near the end farthest from the cup. The dart is thrown by the action of the upper arm and wrist. The throwing arm together with the atlatl acts as a lever. The spear-thrower is a low-mass, fast-moving extension of the throwing arm, increasing the length of the lever. This extra length allows the thrower to impart force to the dart over a longer distance, thus imparting more energy and ultimately higher speeds.

A syringe is a simple pump  consisting of a plunger that fits tightly in a tube. The plunger can be  pulled and pushed along inside a cylindrical tube (called a barrel), allowing the syringe to take in and expel a liquid or gas through an orifice at the open end of the tube. The open end of the syringe may be fitted with a hypodermic needle, a nozzle, or tubing to help direct the flow into and out of the barrel. Syringes are often used to administer injections, insert intravenous drugs into the bloodstream, apply compounds such as glue or lubricant, and measure liquids.

Typically syringes are used for medical purposes, however they can be used a weapon if they were in the wrong hands. Combined with water, syringes can be deadly. One cannot inject water into the blood stream because as soon as it enters the blood stream, red blood cells in the vicinity will burst, due to osmosis, and one would die.

Just a side note, the water bottle can only be used once however it can be used at another station in the event. Choose wisely. 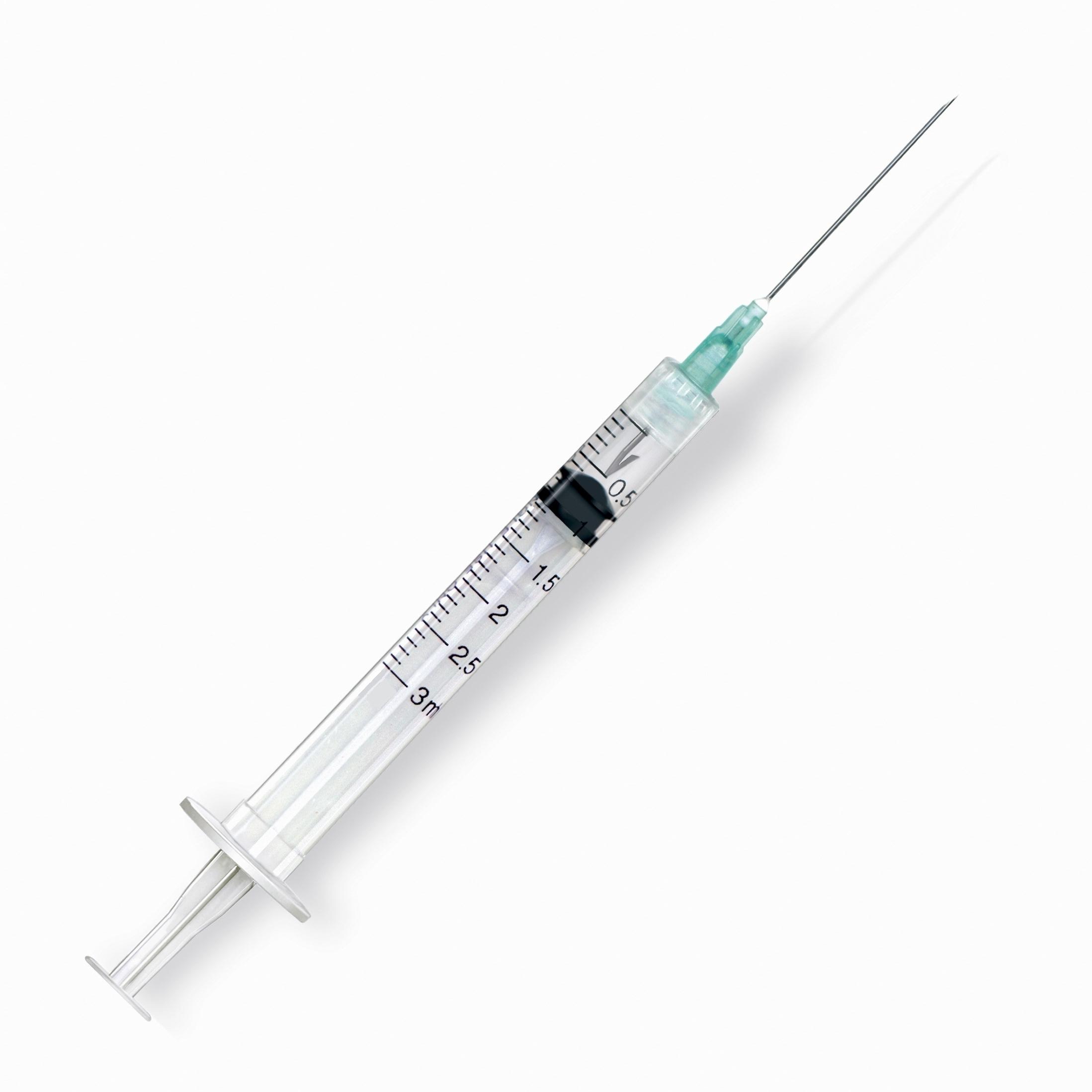 Arms & Armor is written by Michele Byam and published by DK Publishing in 2011. It is part of the DK eyewitness books series. The book is basically a photo essay examining the design, construction, and uses of hand weapons and armor from a Stone Age axe to the revolvers and rifles of the Wild West.

It is available at the Curriculum Materials Center, in the CMC General Collection. It's call number is 355.8 Bya. It also has a CD available for check out. 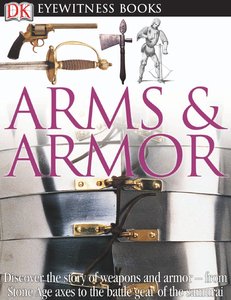